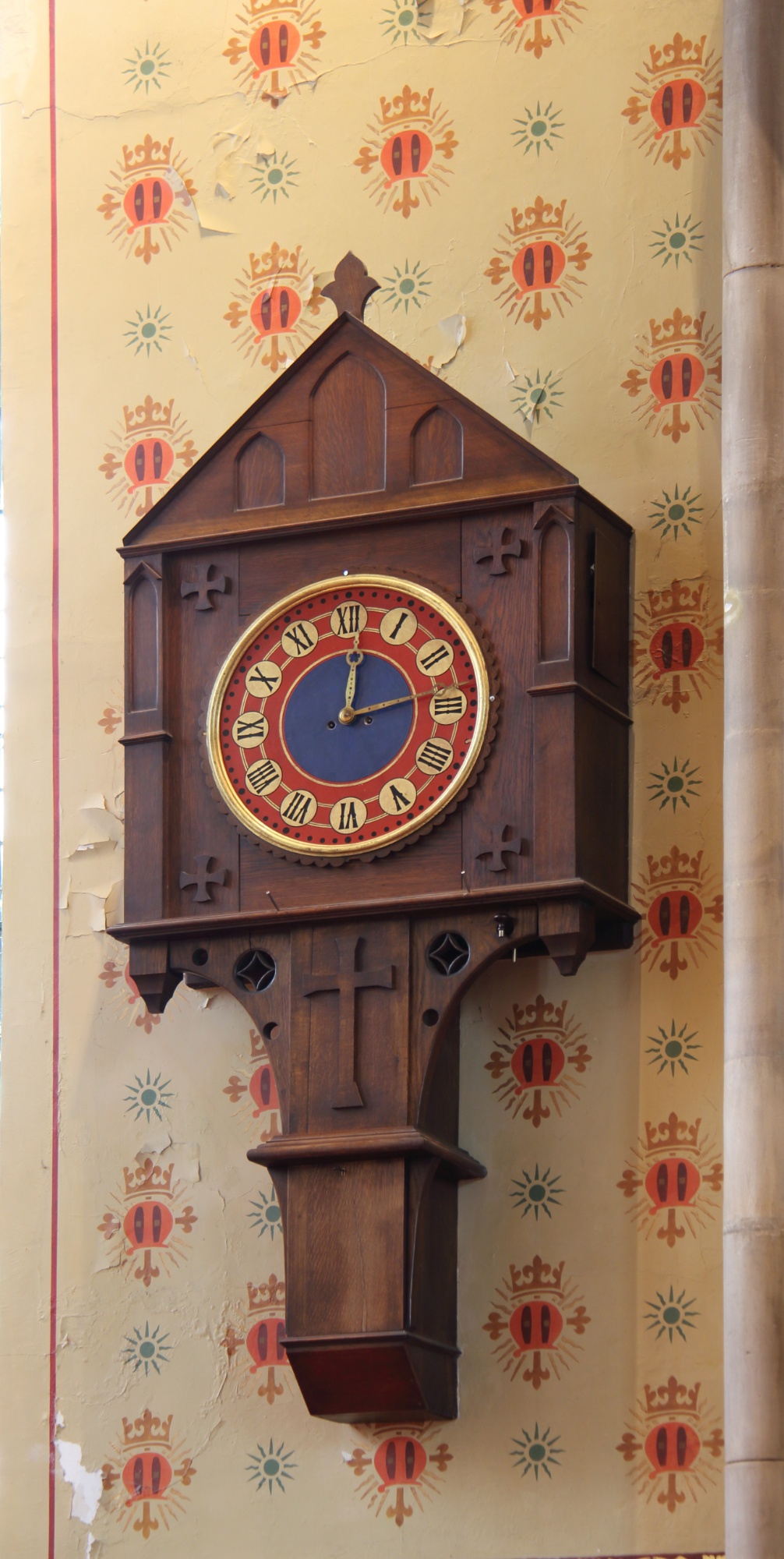 The wall clock above the crypt stairs, made by GAW. Smith, a Lee clockmaker, was presented to the church in 1914. It is a replica of a clock in St Alban's Holborn, the original having been lost as a result of enemy action in 1941. 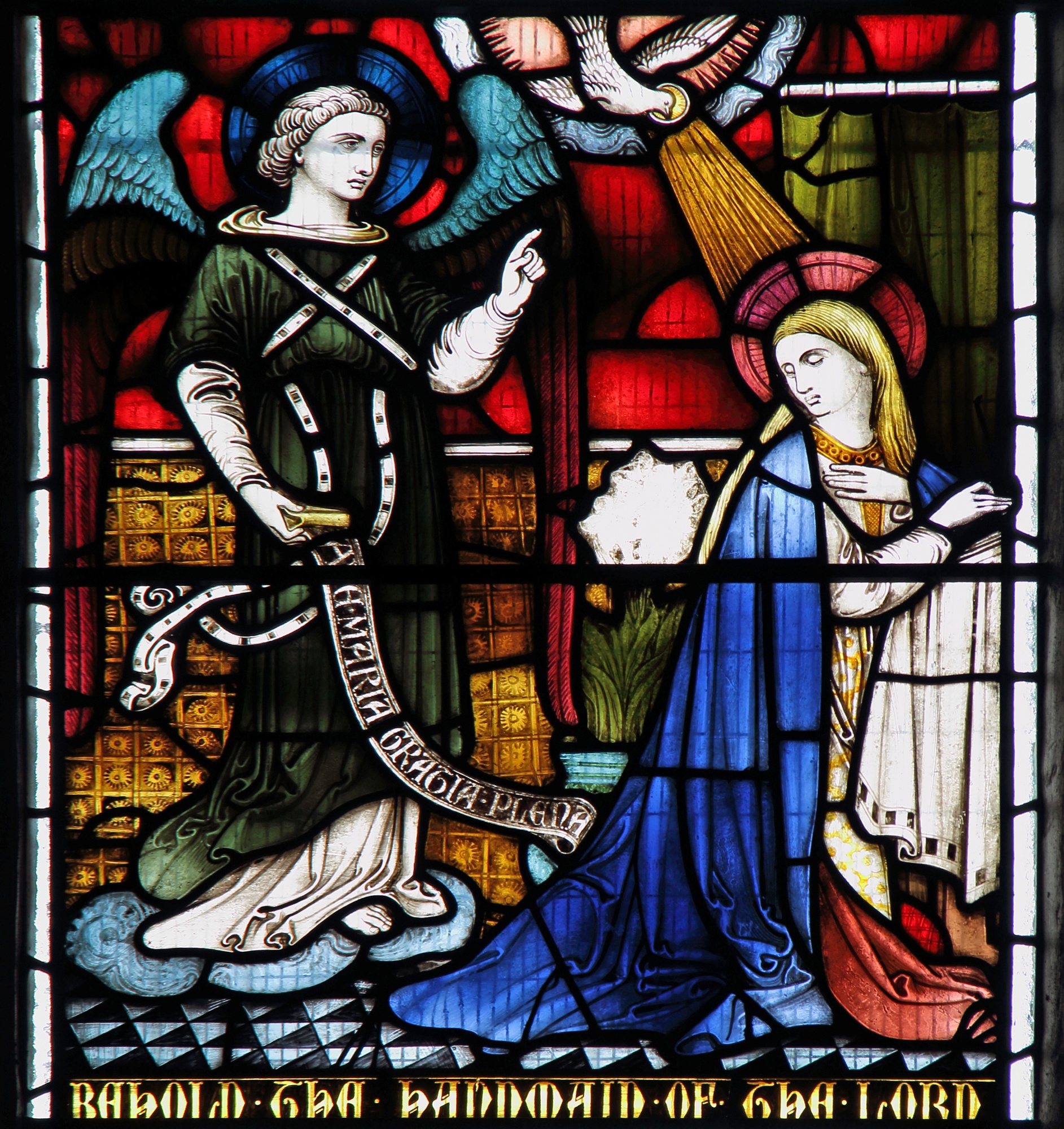 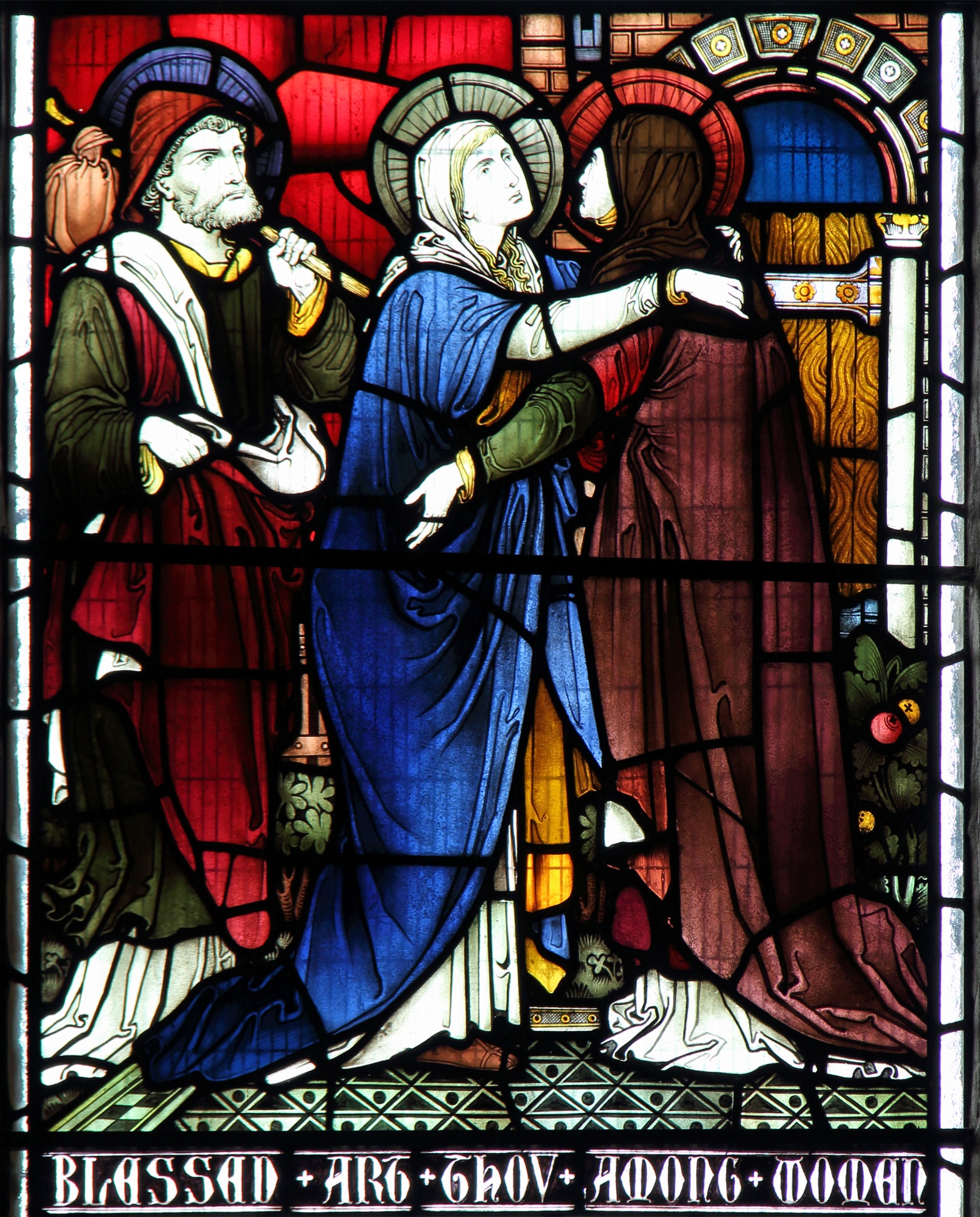 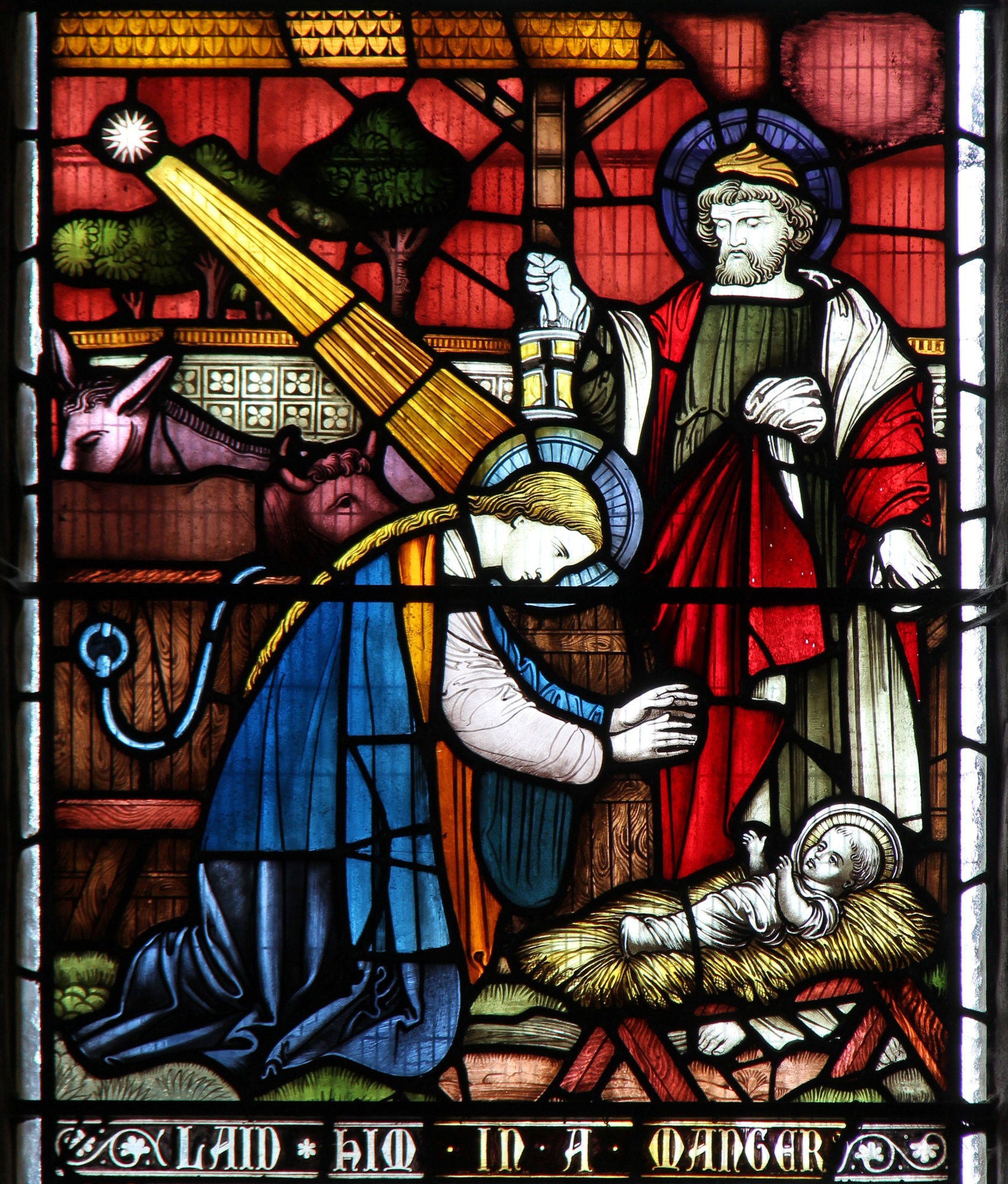 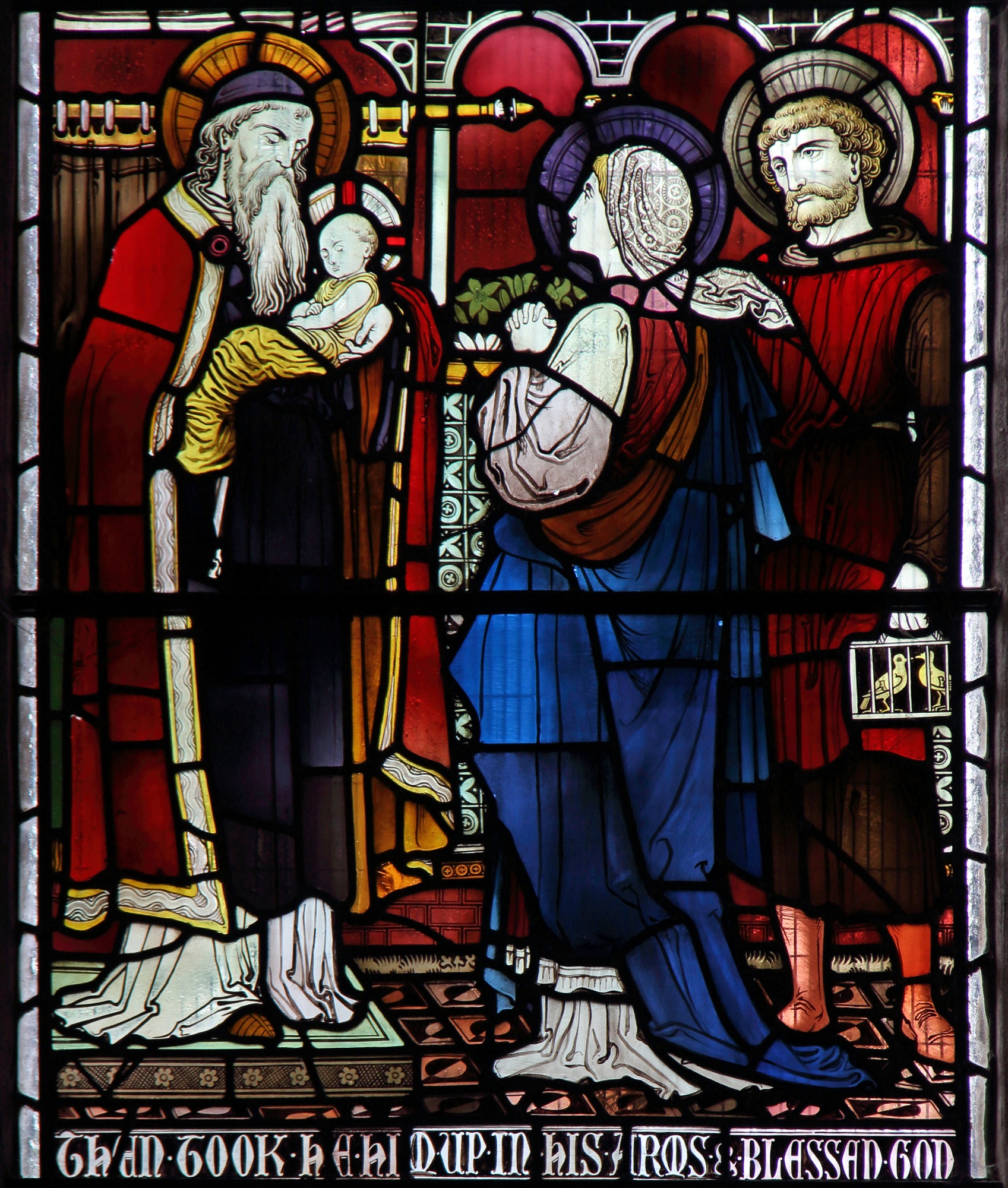 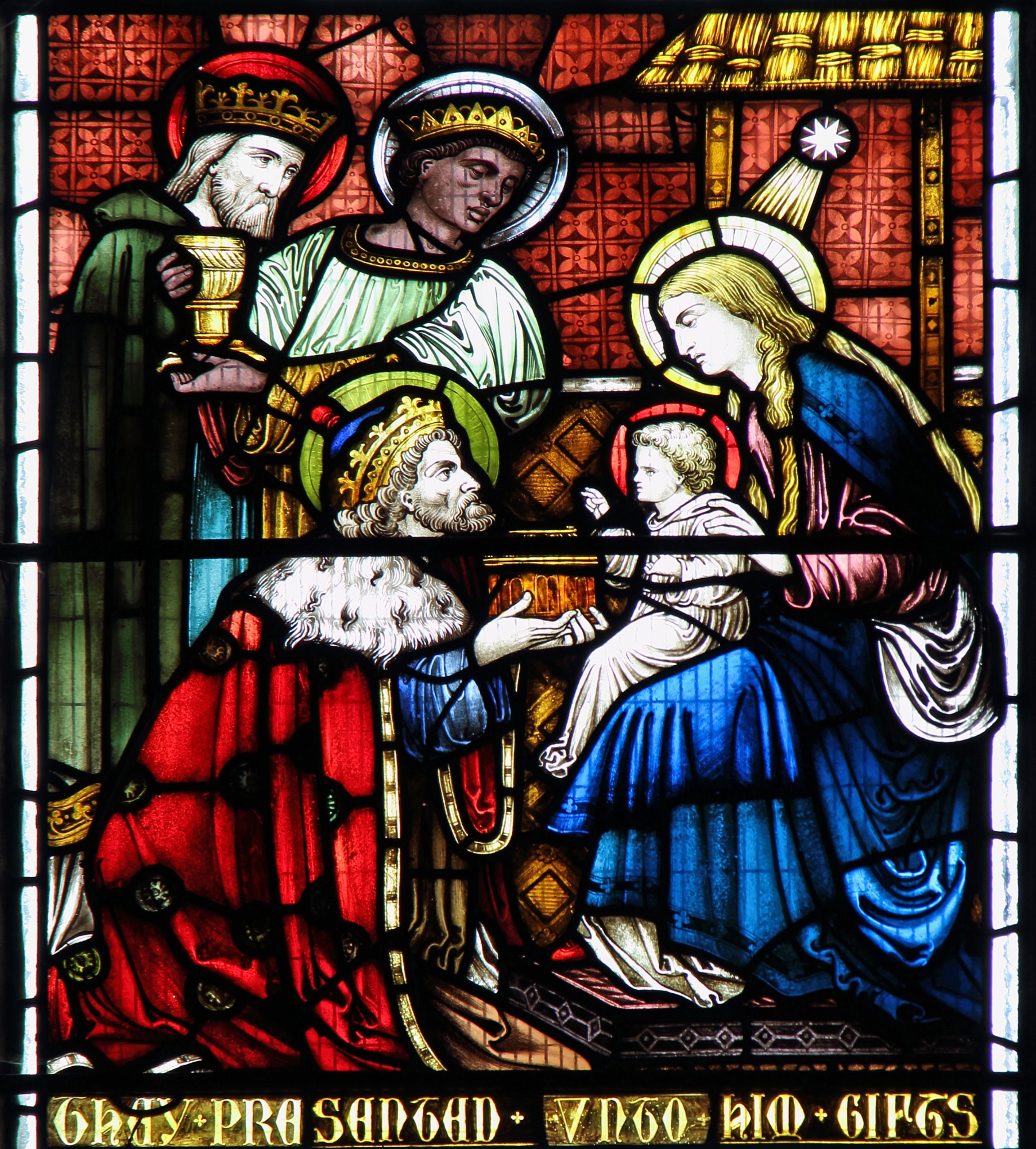 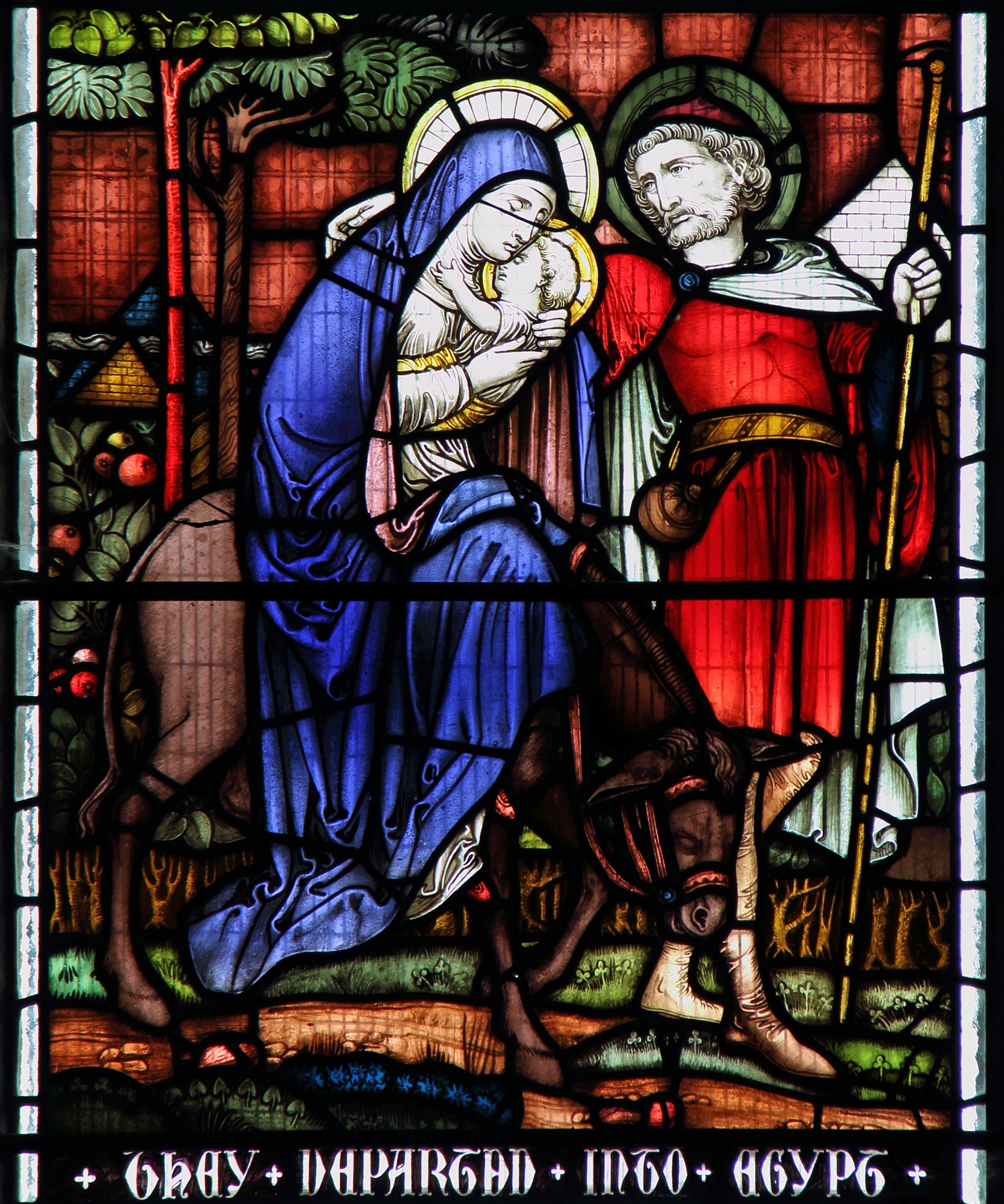 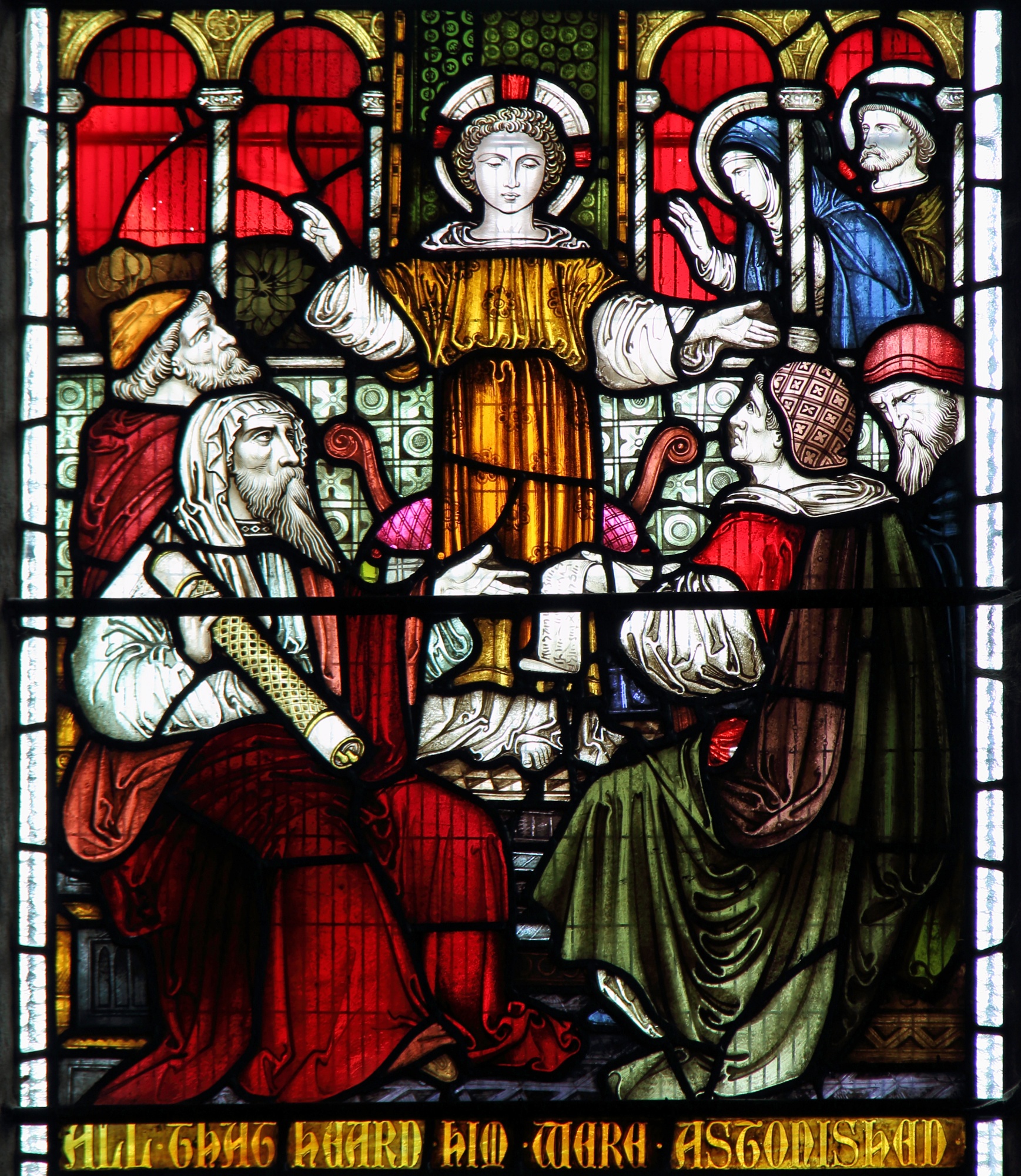 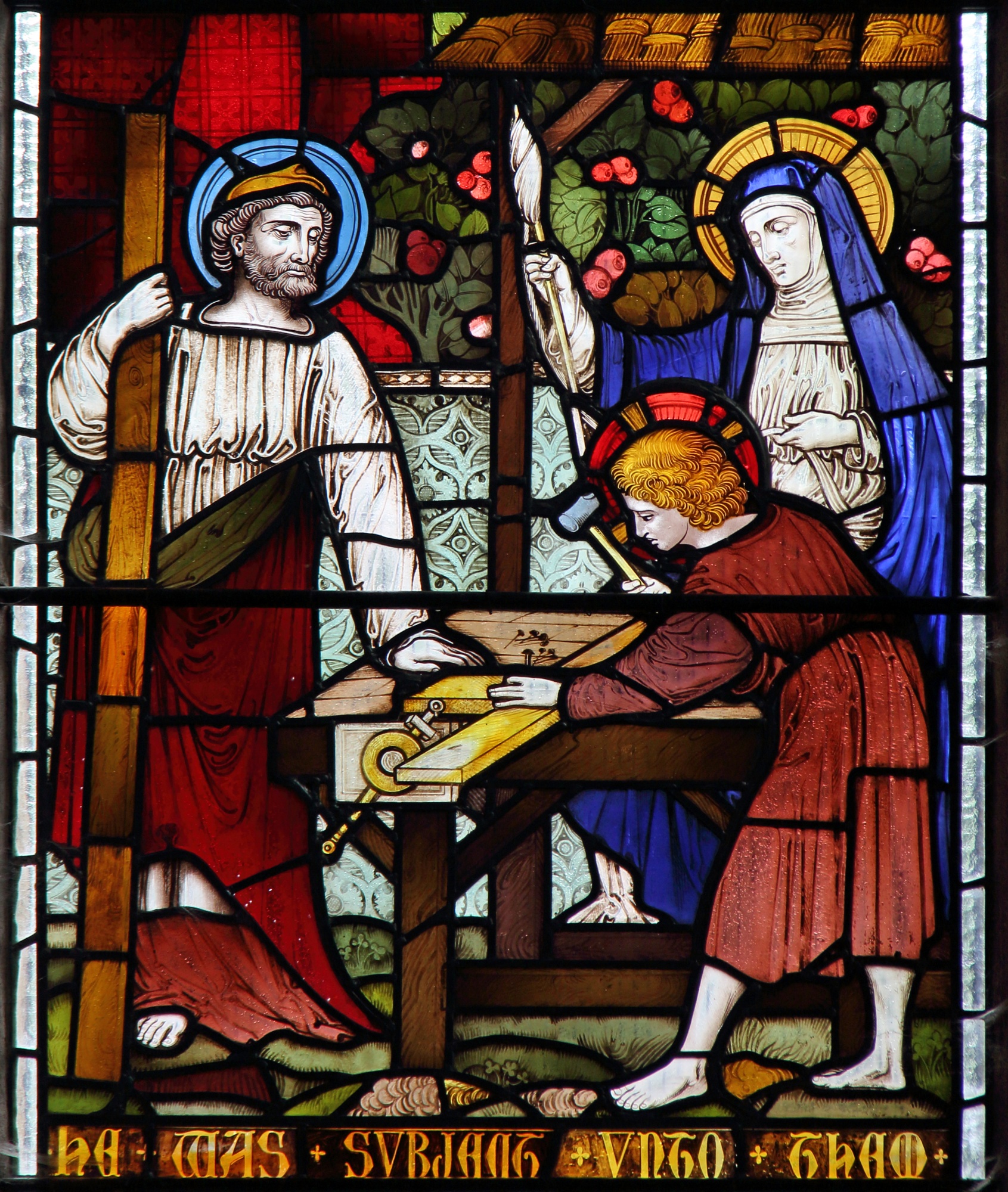 Still within the main body of the church are the two windows either side of the tower in the west wall showing eight scenes from the childhood of Jesus. They were originally behind the organ and replace those that were broken beyond repair. They show (on the left) the Annunciation, Mary's visit to Elizabeth, the birth of our Lord and Simeon receiving Jesus in the temple, and (on the right) the Visit of the Magi, the Flight into Egypt, Jesus among the doctors of the law, and the Carpenter's shop at Nazareth.

Going through the doors, the porch under the tower was at one time used as a baptistery and the large window over the door shows a cross standing above the waters of baptism with a dove, representing the Holy Spirit, above. 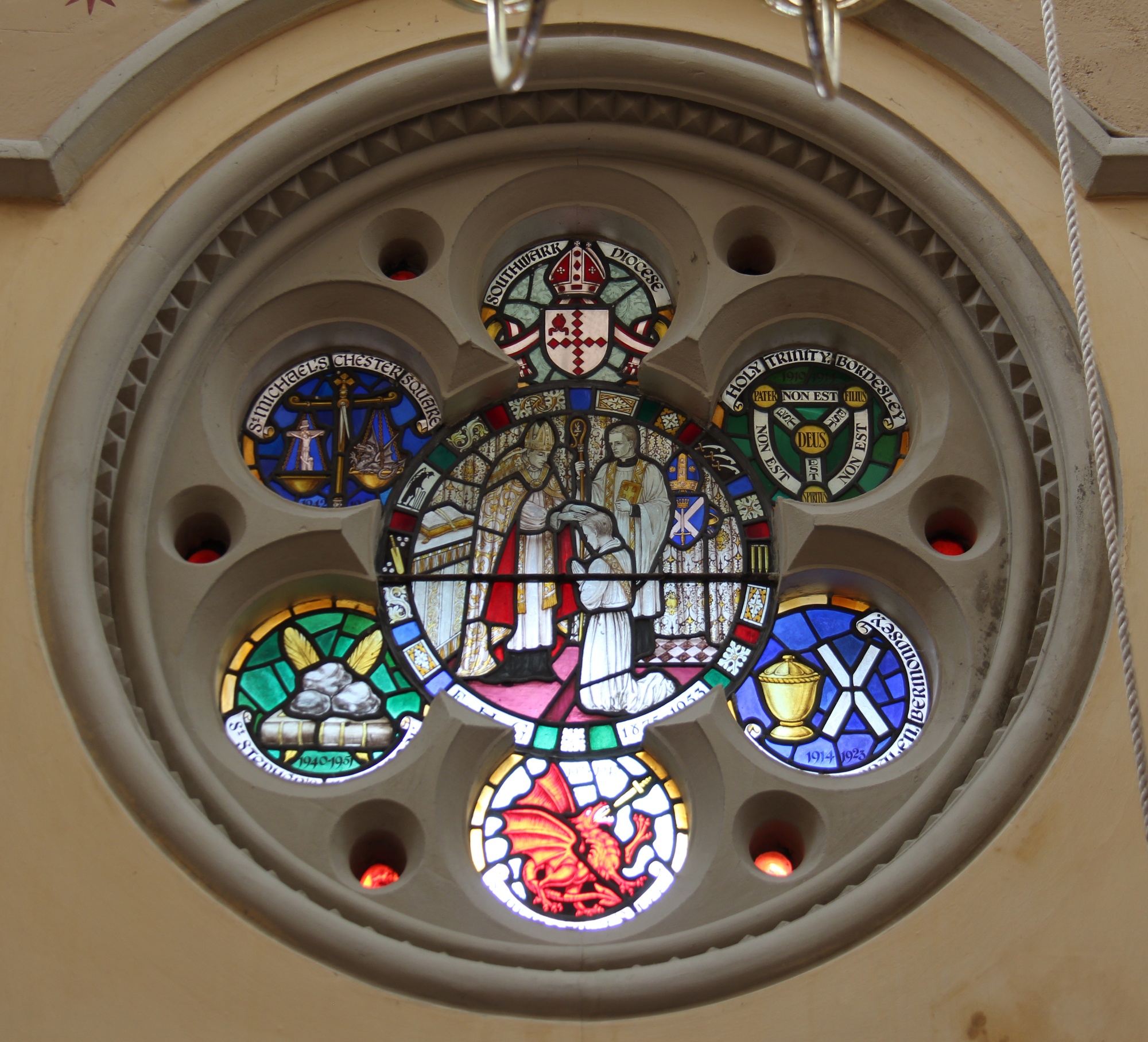 Moving through the doors to look up and back into the church, the small circular window over the west door is in memory of Canon Frank Gillingham (Rector 1923-1940). In the centre St Alban's Abbey is depicted, where he was ordained priest. The kneeling figure is wearing his stole deaconwise and the ordaining bishop is assisted by a priest. The Abbey arms can be seen on one of the copes. The six surrounding cusps are symbolic of the places in which he exercised his ministry, Clockwise from the top they represent Southwark Cathedral, Holy Trinity, Bordesley, St Mary Magdalene, Bermondsey, St Margaret, Lee, St Stephen, Walbrook, and St Michael, Chester Square. The outer circle relates to Gillingham's place in county cricket. Stumps and bails, a cricket hat and balls, the three scimitars of Essex, and Old Father Time from the weather vane at Lord's all find a place, whilst the interspersed colours are those of the Essex County Cricket club and the MCC.

The Bell Tower originally contained a peal of 8 bells, whose combined weight was almost 3 tons, but their continued use was found to be causing structural damage. In 1963 they were re-cast at the Whitechapel Foundry to provide a much lighter carillon of 16 bells which are hit with hammers rather than swung. All these bells can be played by one person and tunes, as well as peals, can be rung.

Details of the original bells, with their inscriptions and weights, are recorded on a board in the belfry. Other boards commemorate the ringing of peals on special occasions. 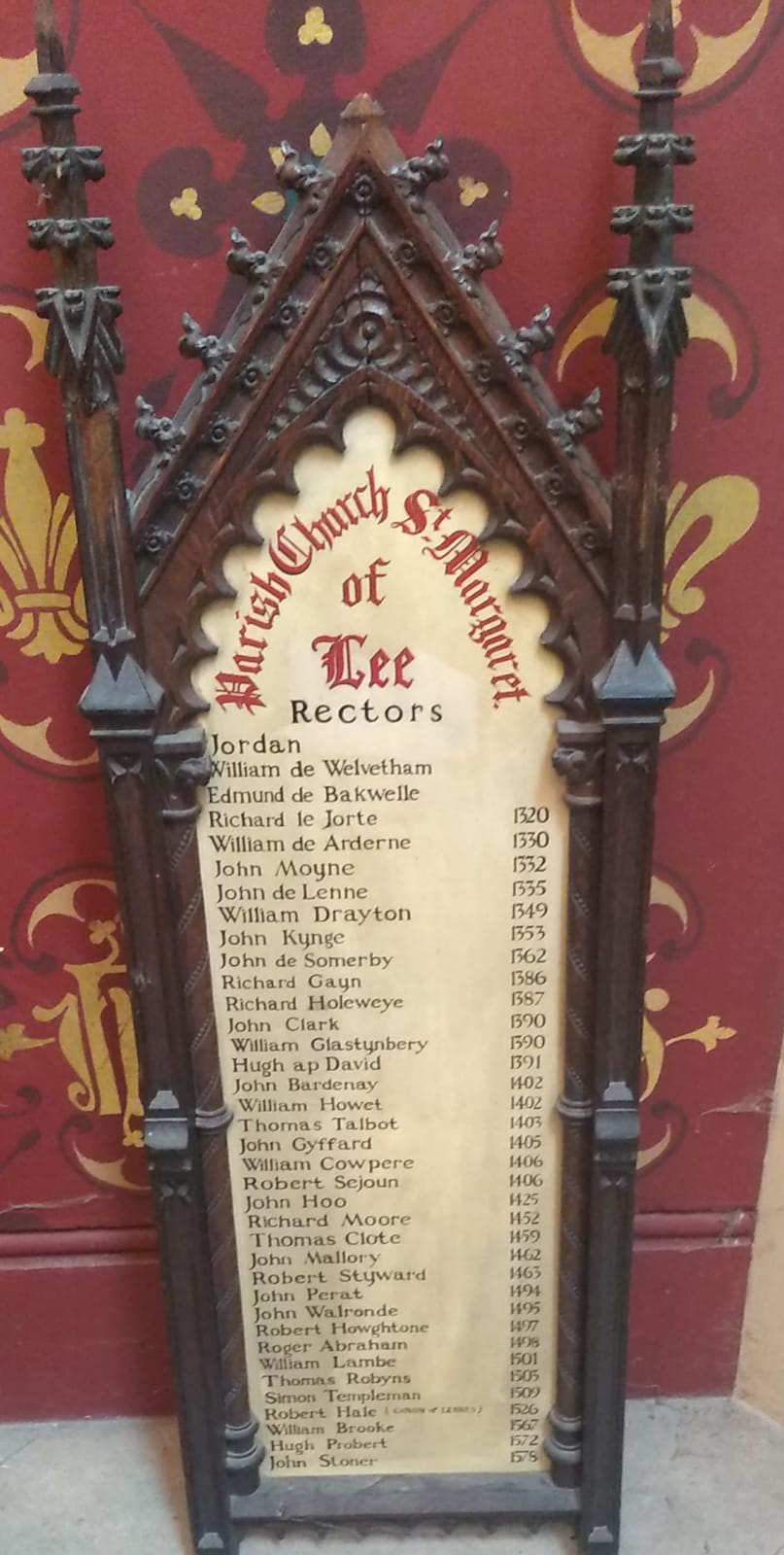 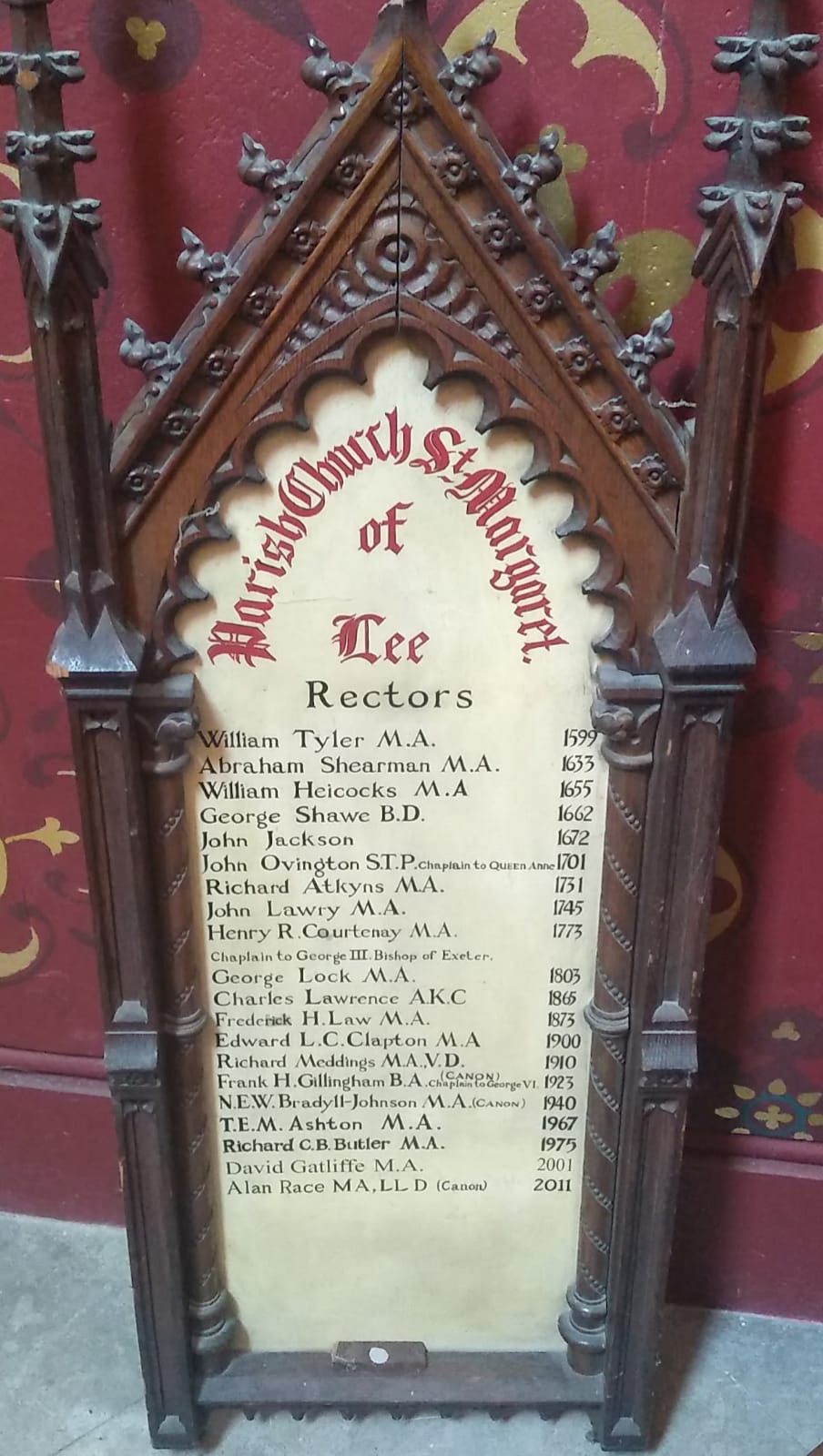 At the entrance to the tower are wooden plaques showing the names of all the incumbents of whom we have records. These include Robert Hale who managed to survive the extreme religious turmoil of the reigns of Henry VIII, Edward VI, Mary and Elizabeth I as Rector from 1526 to 1567; and John Stoner (1578-1599) who appears to have been the first married rector.

In 1633 Abraham Shearman, the son of a Greenwich armourer, arrived and found the Rectory most unsatisfactory. We gain a clear picture of it from a description given in a “terrier of the glebe” prepared for the Visitation of Archbishop Laud, which took place the following year: “The Scite of the Rectory adjoynes to the ChurchYard Eastward. It contains about a acre in an oblong figure, and upon it there is an old ruinate House, on Orchard, a Barn (part tiled and part thatched) and a Shed for a Stable or Cowhouse joining to the North end of the barn in the barn yard. There is a little House adjoyning and belonging to the parsonage containing three Rooms and a Loff wch Loft late had a loover and was used for a Dove-house”. Two years later, in 1636, a new and larger Rectory was built, with a tiled root and consisting of 12 rooms. It was surrounded by a “Garden, Orchard, Barn, Stable and appurtenances”.

A radical Puritan was appointed in 1655 under the Commonwealth. On the restoration of the monarchy, William Heicocks joined an eccentric and fanatical sect, known as the Fifth Monarchy Men, who staged an uprising and whose leaders were beheaded. Lee Church became a meeting place for about 150 of these gentlemen, some of whom occupied houses in the villages nearby. The authorities became suspicious and, following the visit of a secret informer, it was reported that “encouragement was given to seditious teachers” who preached “very dangerous matter”. Warrants were issued for the arrest of Colonel Thompson, a former member of Cromwell's Council of State and resident of Lee Place. This officer was a friend of Heicocks, who wrote to Charles II pleading for his release. The Act of Uniformity, authorising the use of the 1662 Prayer Book, became effective on St Bartholomew's Day in that year and Heicocks was unable to accept the obligations it imposed on him. He was one of 1,800 clergy who were forced to resign their livings.

Henry Courtenay (1773-1803), was a remarkable man and claimed descent from the Emperor Charlemagne. A pluralist before accepting the living of Lee, he was frequently absent from the parish and more especially so after accepting the lucrative living of St George's, Hanover Square, in 1774. His work in rural Lee was left to assistant curates, whereas St. George's had the attraction of being a centre for society weddings. One such marriage, between Augustus Frederick and Augusta Murray in 1793, proved to be that of the Duke of Sussex (6th son of George III) and the daughter of the Earl of Dunmore. Six months later it was declared to be a violation of the Royal Marriages Act. At the enquiry which followed, Courtenay alleged that he was ignorant of the rank of the contracting parties. He was appointed Chaplain to George Ill and, in 1794, was consecrated Bishop of Bristol. This did not inconvenience him, as he now became an absentee bishop and continued to live in his Mayfair Rectory. In 1797 he was translated to be Bishop of Exeter but still preferred to live in London. His visits to Lee were rare.