4b. East End: Chancel and Sanctuary 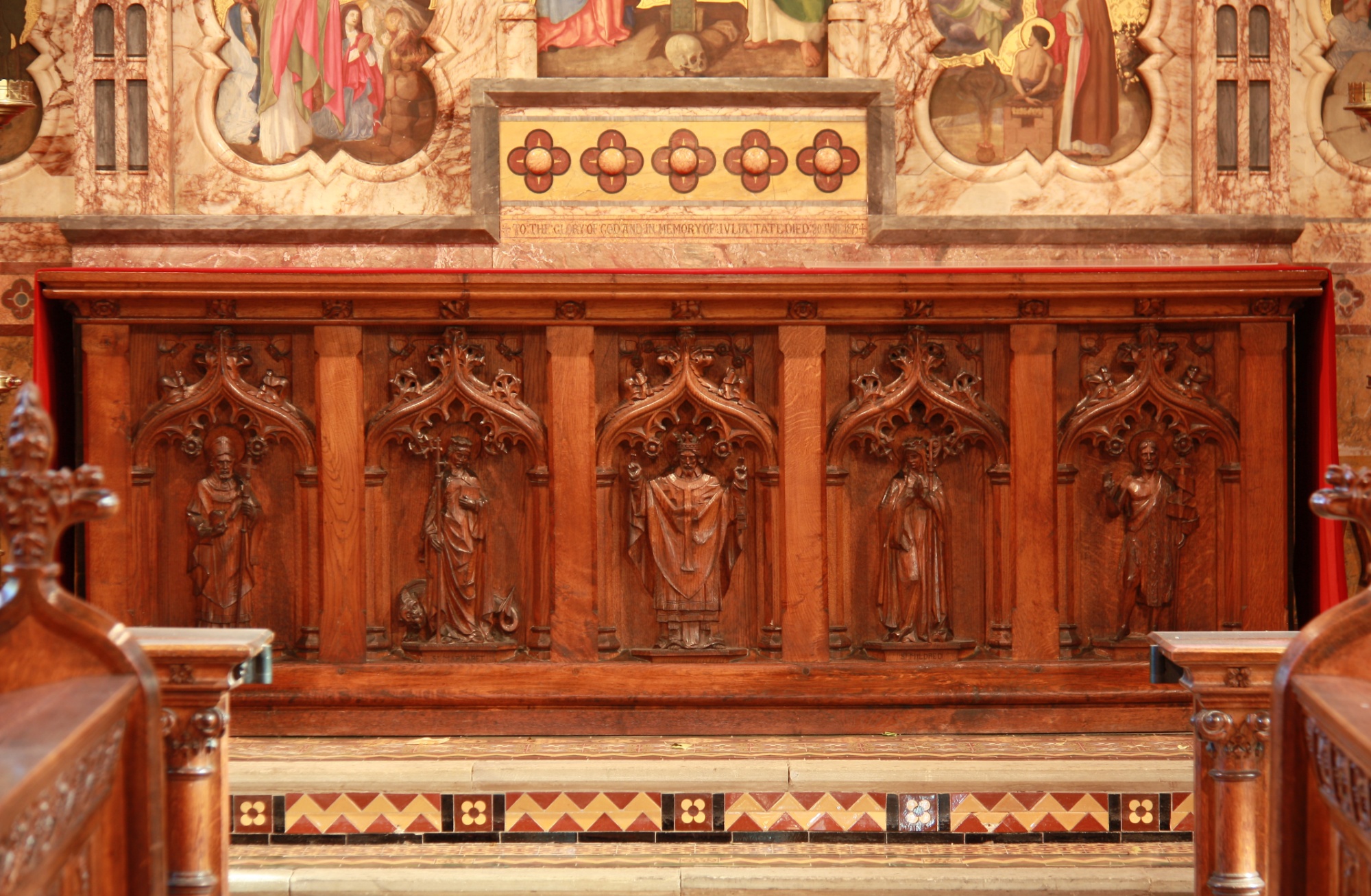 The High Altar is the 1914-1918 War Memorial and is marked as such on the right hand side underneath the altar cloth. Its front consists of five panels, with carved figures of St Margaret and the patron saints of some of the other daughter churches. A wooden memorial with the names of fallen parishioners rests on the floor to the right of the altar, awaiting rehanging. *See below 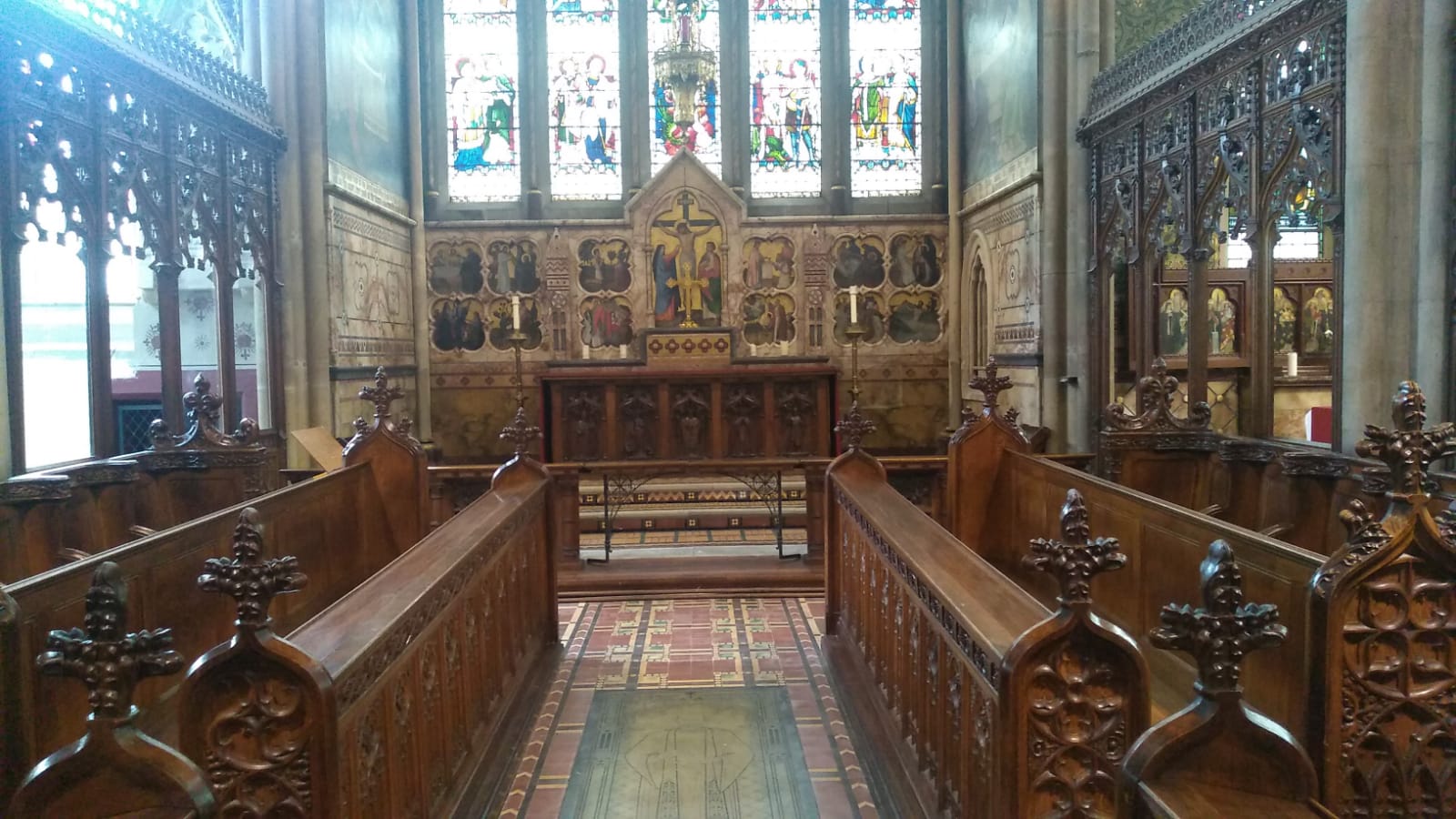 The altar cross and candlesticks (the latter stolen in 1976) were given by Law's brother in law, the 4th Marquess of Londonderry, and are set with semi-precious stones from the Holy Land. The sanctuary lamp dates from 1914. The reredos of marble mosaic, designed by Brooks, was given in memory of Julia Tate in 1875. The alabaster frame was produced by Thomas Earp (who also carved the Victorian Eleanor Cross in the forecourt of Charing Cross Station, some of the external carving on the Palace of Westminster and the reredos figures for the chapel of Magdalen College, Oxford) and the thirteen paintings by Nathaniel Westlake, a major Victorian painter, designer and art historian, whose many commissions included work at Cardiff Castle, the Victoria and Albert Museum and many churches. 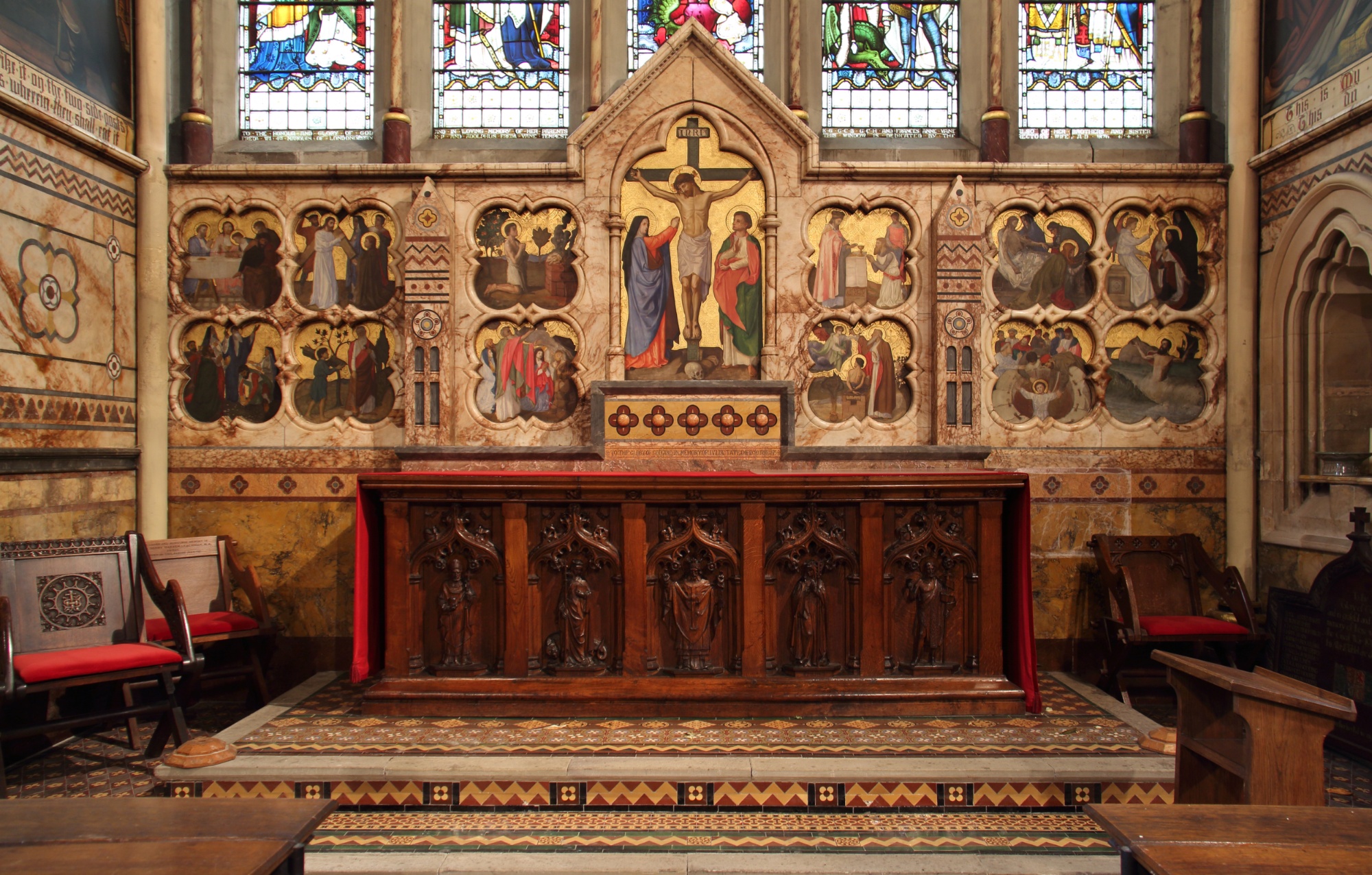 The Crucifixion, in the centre, which, in the words of the Prayer Book, constituted "a full perfect and sufficient sacrifice" for the sins of the world, is surrounded by the offering of other sacrifices of which it is a fulfilment (Abel's, Noah's, and Melchisedec's and Abraham's offering of Isaac). On either side are paired medallions depicting the Last Supper and gathering of the manna; Christ on the way to Calvary and Abraham and Isaac on their way to Mount Moriah; the burial of Jesus and Joseph's being thrown into the pit; and the resurrection of our Lord and Jonah coming alive out of the belly of the great fish. In each of these an Old Testament story is seen as a type or anticipation of an event in the life of Jesus. The floor is tiled with Minton tiles.

The carved oak screens on either side of the chancel, the choir stalls and communion rails were all given by Law. The communion rail has medallions showing the Lamb of God, a pelican feeding her young, the Last Supper and the Ark of the Covenant, with pomegranates and roses in the recesses. The clergy and choir stalls are superb examples of Flemish carving and were made by H. and D. de Wispelaere of Bruges. Selected verses from the Benedicite are inscribed on a ribbon effect on the front stalls, while angels above the clergy stalls support scrolls bearing the words, "O Ye priests of the Lord, bless ye the Lord". 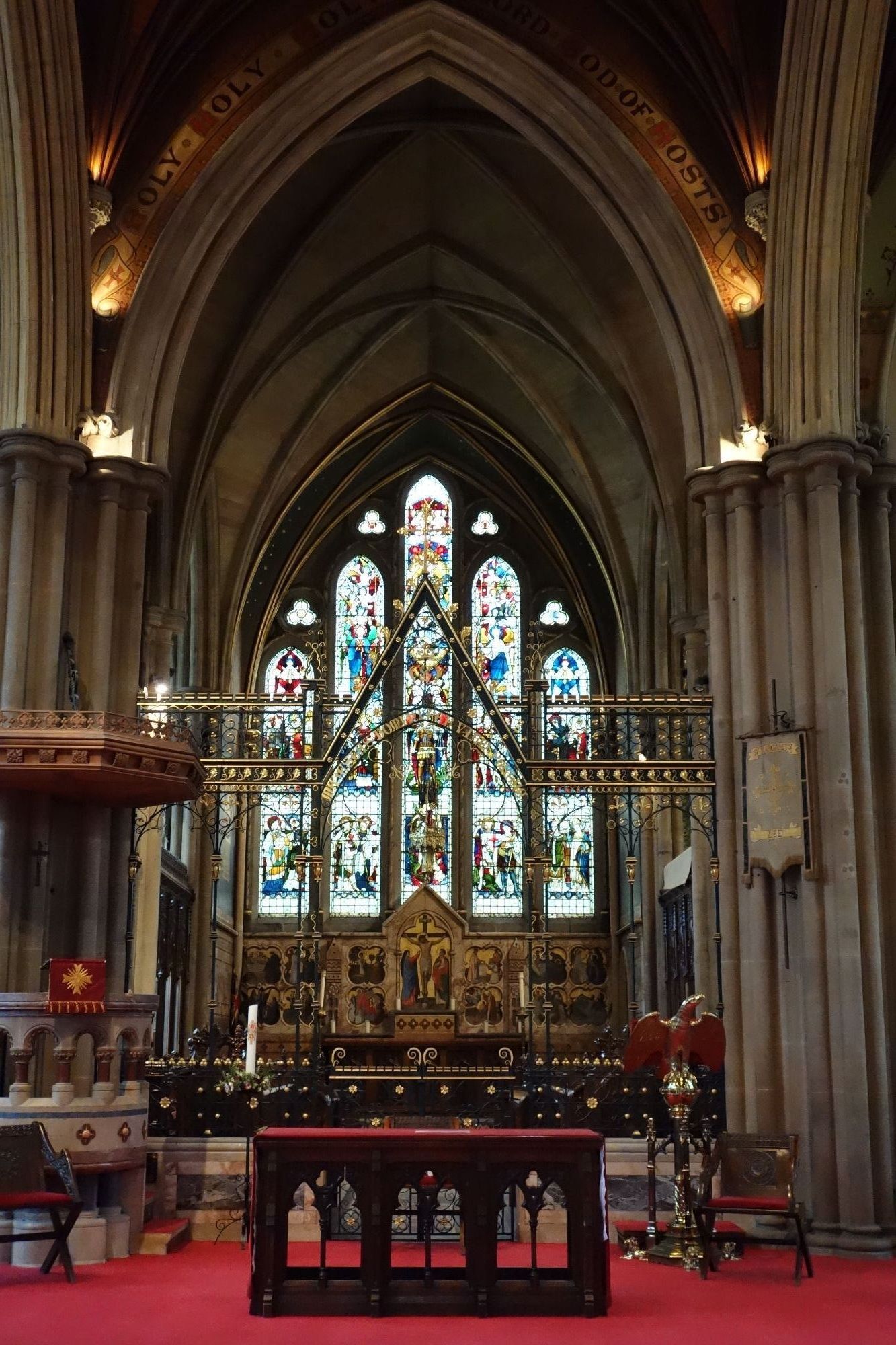 The wrought iron Rood Screen, which divides the nave from the chancel, was given in 1887 in memory of Capt. E. C. J. Tate. Over the centre gate is the text, "Majestas Domini per Viam Portae" (The majesty of the Lord by the way of the Gate).

There is a life size brass of Frederick Law (Rector 1873-1900), holding a chalice, between the choir stalls.

*The High Altar was designed by Sir Charles Nicholson (1867-1949) whose brother Archibald Keightley Nicholson founded the firm that made the 4 lancet windows in the north wall that were erected in the early 1950s. Both the high altar and the memorial panel were carved by Violet Pinwill who helped found the Devon firm of Rashleigh Pinwill. She is our only lady craftsman. The High Altar carvings represent St Margaret's Church and four of her daughter/granddaughter churches. Jesus Christ (Christ Church, Lee Park), St Augustine (St Augustine’s, Hither Green), St Mildred (St Mildred’s, Brownhill Road), St John the Baptist (the Victorian Chapel of St John in the original Boone’s Almshouses in Lee High Road/Lampmead Rd). Miss Pinwill created bigger copies of Christ and St Margaret for Truro Cathedral.