1. Introduction to the Building and Windows

The present church was conceived in the 1830s in response to the rising population in the parish coming from the Victorian building boom, the physical state of the existing church - close to collapse – and a full churchyard. Four architects submitted drawings and specifications for the new church and, after careful consideration, those of John Brown of Norwich were chosen. Land was acquired from a parishioner, Thomas Brandram, at an advantageous price and the foundation stone was laid by Sir Thomas Baring on 17th July 1839. The church and churchyard were consecrated on 11th March 1841 by the Bishop of Rochester. 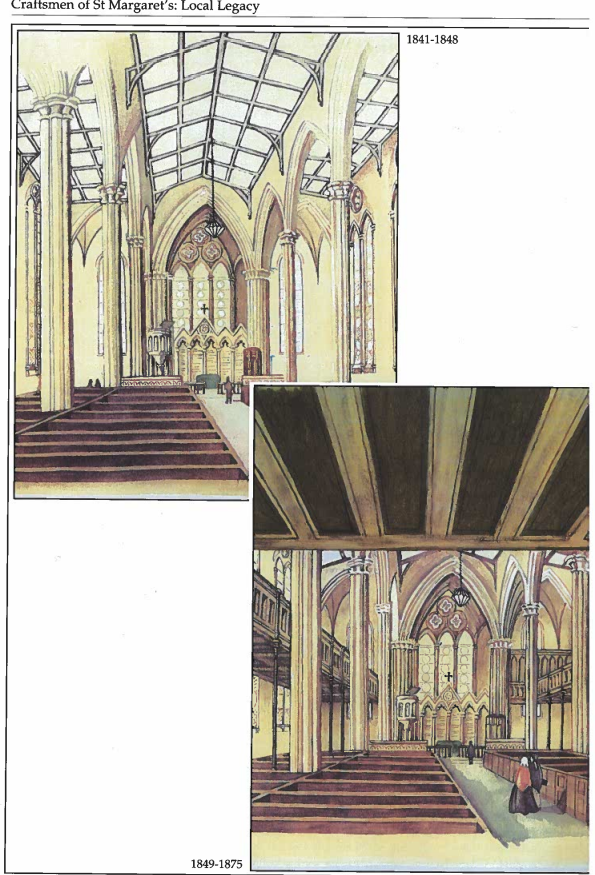 It was originally a plain building, with a flat but painted lathe and plaster ceiling, and was furnished with pine pews. The church extended only as far as the present day pulpit and almost immediately became too small for the parish as the Victorian building boom took hold in what had hitherto been open farmland between the church and Lee High Road. The solution to this was partly the foundation of daughter churches and so Christ Church, Lee Park (1853) and Holy Trinity, Glenton Road (1863) – both now lost – and St Mildred’s, Lee (1879), The Good Shepherd, Lee (1881) and St Augustine’s, Grove Park (1887) were all built to serve the needs of the geographically large parish. Within St Margaret’s itself seating galleries were built in the early 1850s. These survived until the extension of the church in the 1870s but evidence of them can still be seen in the marks half way up the main pillars of the nave and in the blocked off door which is in the spiral staircase which leads up to the bell tower. 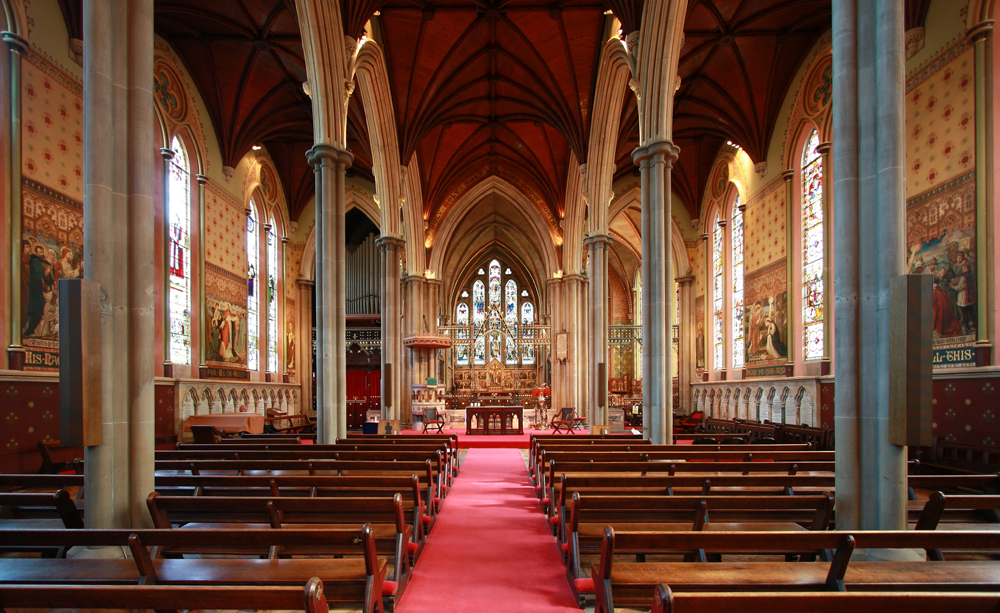 The arrival of Frederick Law as Rector in 1873 marked the start of the biggest changes to the fabric of the church. Law had been influenced by the high church Oxford Movement and on his arrival he described the building as “utterly depressing” and inadequate for the sacramental worship which he hoped to introduce. He therefore engaged James Brooks to re-model the church. Work began two years later in 1875. The church was lengthened by the addition of the chancel, sanctuary and Lady Chapel; a new arched roof was introduced beneath the old one; every wall was covered with stencilling and every window filled with stained glass. In all of this the aim was to build a church which spoke of the mystery and majesty of God. One of the texts in the nave reads “I will fill this House with Glory, saith the Lord”. All this work was undertaken very largely through the personal generosity of the Rector or, rather, his wealthy wife, Lady Adelaide Law, a daughter of the 3rd Marquess of Londonderry.

The majority of the windows are from the 1870s and 1880s and were provided by Clayton and Bell, one of the foremost markers of the 19th century whose glass can also be found in Westminster Cathedral, Truro Cathedral and King’s College, Cambridge. Enemy action in 1940 destroyed or damaged all the windows at the west end of the church on both sides. After the war, the remaining glass was re-positioned on the south side, against the strongest sunlight, and new modern glass was designed for the darker, northern aspect, to provide a better balance of natural light. The old windows were re-arranged so that those depicting lady saints were placed together in the Lady Chapel, whilst the undamaged glass from the windows behind the organ was used to fill the lights in the west wall. As a result of post-war shortages, the re-leading and re-siting of the windows was undertaken in a sub-standard manner and by the turn of the millennium they had sagged badly and were letting in water, to damage the interior decoration of the church. The windows on the south and west sides were removed, re-leaded and replaced in 2008-09.